Question Your World: How Is Artificial Intelligence Used in Movies?

Top Gun: Maverick currently holds the title of highest-grossing film of 2022. After all, it’s got everything: Tom Cruise! Fast planes! Sorta witty one-liners! And an incredible use of artificial intelligence! How is AI used in movies?

ScienceMuseumofVA · Question Your World - How is AI used in movies?

The original Top Gun movie came out in 1986, where Maverick and Ice Man became two iconic characters on the silver screen. Ice Man is played by Val Kilmer who, unfortunately, was diagnosed with throat cancer and in 2017, he finally went public with the news that he no longer had his voice. In 2018 and 2019, they filmed and completed the Top Gun: Maverick movie, but the pandemic delayed the release until this year. So, finally, movie goers got to see this huge blockbuster, including some new iconic one-liners by Val Kilmer. But how?

Val Kilmer’s voice in this new Top Gun movie is entirely a result of artificial intelligence. Sound engineers used AI machine learning technology to create Kilmer’s voice. The production team drafted Sonantic, a London-based AI startup, to help with the audio production in this film. But it was just specifically one thing: Ice Man’s voice.

To do this, they fed existing clips of Kilmer’s voice to a machine that analyzed its many characteristics, then created a synthetic replication capable of saying new lines! Val Kilmer himself has publicly supported this saying how impressed he was with the final product and use of this technology. 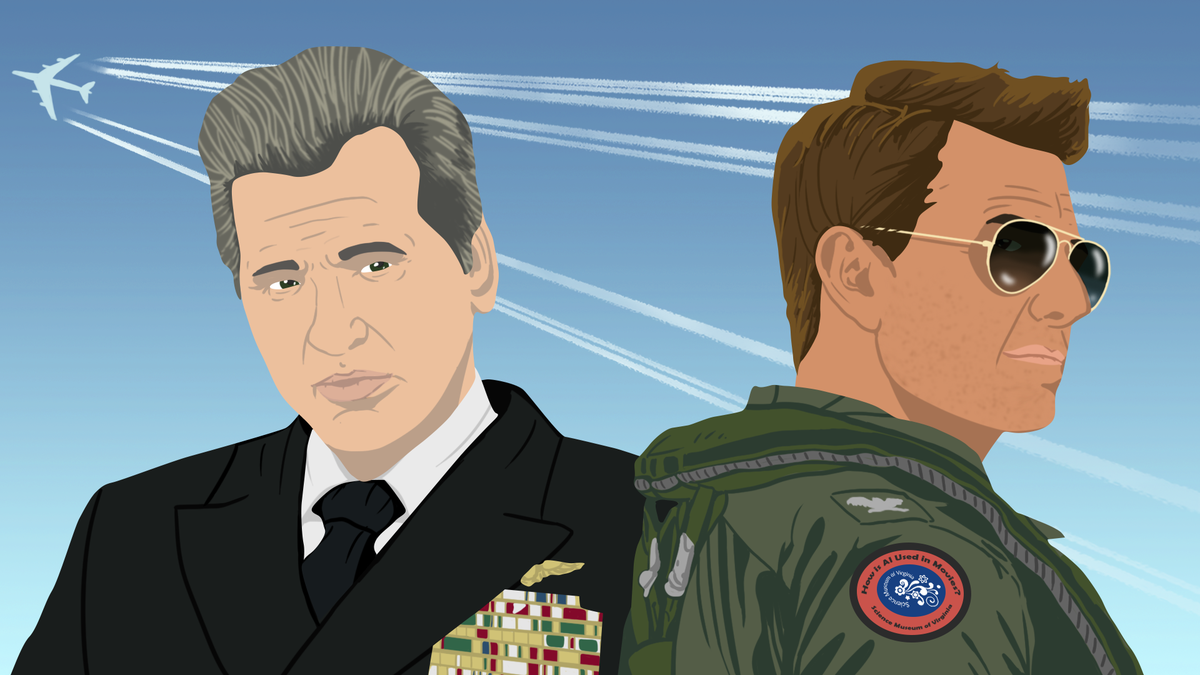 This is not the first time artificial intelligence and the film industry have overlapped. AI has long been a topic in films dating all the way back to the 1927 film Metropolis! Since then we’ve seen AI on screen in movies like Star Wars, Blade Runner, Wall E, The Matrix and beyond.

Now, not only a point of topic, but also regularly used in application, AI has become a part of movie-magic production! AI technology is used in helping take books and turning them into scripts. This technology can also create and design landscapes, change lighting and color tones, create faces for extras, help advertise the film to audiences, recreate actors who have passed away, create original music, add special effects, and it’s even been used to produce an entire movie! In 2018, Zone Out was released, a short film created entirely by AI using stock clips and actors on green screen. Admittedly the movie’s not good … nor does it make sense all the time ... but this was the first time AI was used to put together essentially the entire movie.

There’s still a lot more growth ahead for the AI industry and the various applications we will experience using this technology. In regards to the AI used for Val Kilmer’s voice, it’s currently made a lot of headlines and raised some interesting ethical questions along the way, too. This technology will be amazing for giving a voice to those who lost theirs and create new audio possibilities into the future. This AI also could be used for nefarious uses as well. In 2021, AI voice cloning was used to steal $35 million from a bank!

Stay tuned as this technology and science story continues to unfold in movies and everywhere else!

Question Your World: Have We Bridged the Uncanny Valley?