Hi, everyone. Michael Andrews, Museum educator here. Just because you can’t come sample yummy items in the Boost! kitchen right now, it shouldn’t stop you from trying recipes at home. An at-home science lesson that has an edible result is a win, win in my book. And if I'm picking the recipe, it’s going to be salsa. Salsa is my deal!

The word salsa just means sauce, and there are many varieties. We are all familiar with tomato-based salsas, but some include peanuts, pumpkin seeds, mushrooms, oil, cream and many other delicious ingredients. 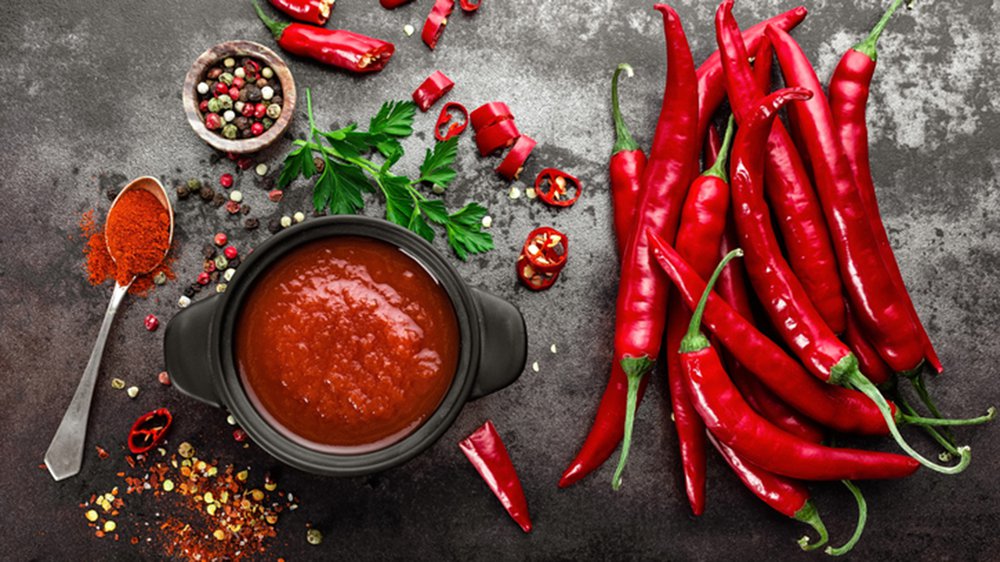 Some salsas are cooked, either in a pan after it has been blended, or the ingredients are roasted, toasted or boiled beforehand. Some are made from diced produce, some are blended and some are mashed in a traditional molacate, a type of large stone mortar and pestle.

Most salsas have some basic components. Chiles (either dried or fresh), aromatics (such as onions and garlic), acid (like tomatoes, limes and vinegar) and salt. The right amount of salt makes all the difference, so taste as you go!

Some people may be hesitant about the heat of the chile pepper, while others want it as hot as they can make it. There are many kinds of chiles with varying degrees of heat. Heat is measured on the Scoville Scale. The original Scoville unit measure is subjective (influenced by personal taste); modern methods can use high-performance liquid chromatography to analyze the amount of capsaicin in a pepper. Bell peppers are in the 0 to 100 range of Scoville heat units, whereas many common Mexican chiles, such as jalapenos, chipotles and guajillos are in the 2,500 to 10,000 Scoville range. The hottest chiles, like the Carolina Reaper and Trinidad Scorpion pepper, are in the 1,500,000 to 300,000,000 range. That’s the same level as law enforcement grade pepper spray!

Chile peppers are hot because of a chemical called capsaicin. Capsaicin is a neuropeptide that impacts the peripheral nervous systems of mammals, creating a burning sensation in any mammal tissue that comes into contact with it. This is an evolutionary adaptation for the plants that produce the fruit (yes, peppers are a fruit not a veggie!), so that mammals will not eat it. Birds, on the other hand, are unaffected by capsaicin, and can eat the hottest chiles without any issues. This is so that birds would spread the seeds. In fact, many wild species of hot peppers rely solely on birds to spread their seeds!

It is important to wear gloves when working with chiles, so that the capsaicin doesn’t get under your fingernails. I know we are all trying hard not to touch our face, but if you forget, it is very unpleasant when you later on rub your eyes or nose and feel the awful burn on those sensitive areas! You can control the heat level of a chile by removing the seeds and the seed lining, which are the hottest part of the pepper, so don't be afraid of chiles.

Here are some recipes for classic taco-stand salsas that can be found throughout Mexico. They involve using dried chiles, but you can easily substitute them for fresh ones, such as jalapenos, serranos or for the bold, habeneros!

Working with dried chiles is very simple, and will open up the world of Mexican cooking for you. First break off the stem, tear the chile enough to dump or scrape the seeds out. Then, in a hot, ungreased pan, toast them for several seconds on each side until the color brightens and they become aromatic. From there you can either grind them into chile powder (which will be far more flavorful than the store-bought kind) or you can soak them in hot water for 30 minutes to make them soft so they can be blended or pureed. (Side note: this is also a great way to improve your chili-- the Texas-style beef kind--which has its roots in a Mexican dish called Chili con Carne.)

If you are unfamiliar with tomatillos, they look like small, green tomatoes wrapped in husks. (By the way, they actually aren’t tomatoes, but both tomatillos and tomatoes are fruits, not veggies.) When buying them, look for a bright green color and smooth skin. Play it safe and buy a couple extra, as you may need to discard some. Under the husk, they tend to be sticky, so rinse them well under warm water. They are very tart and juicy, and are what makes salsa verde green! 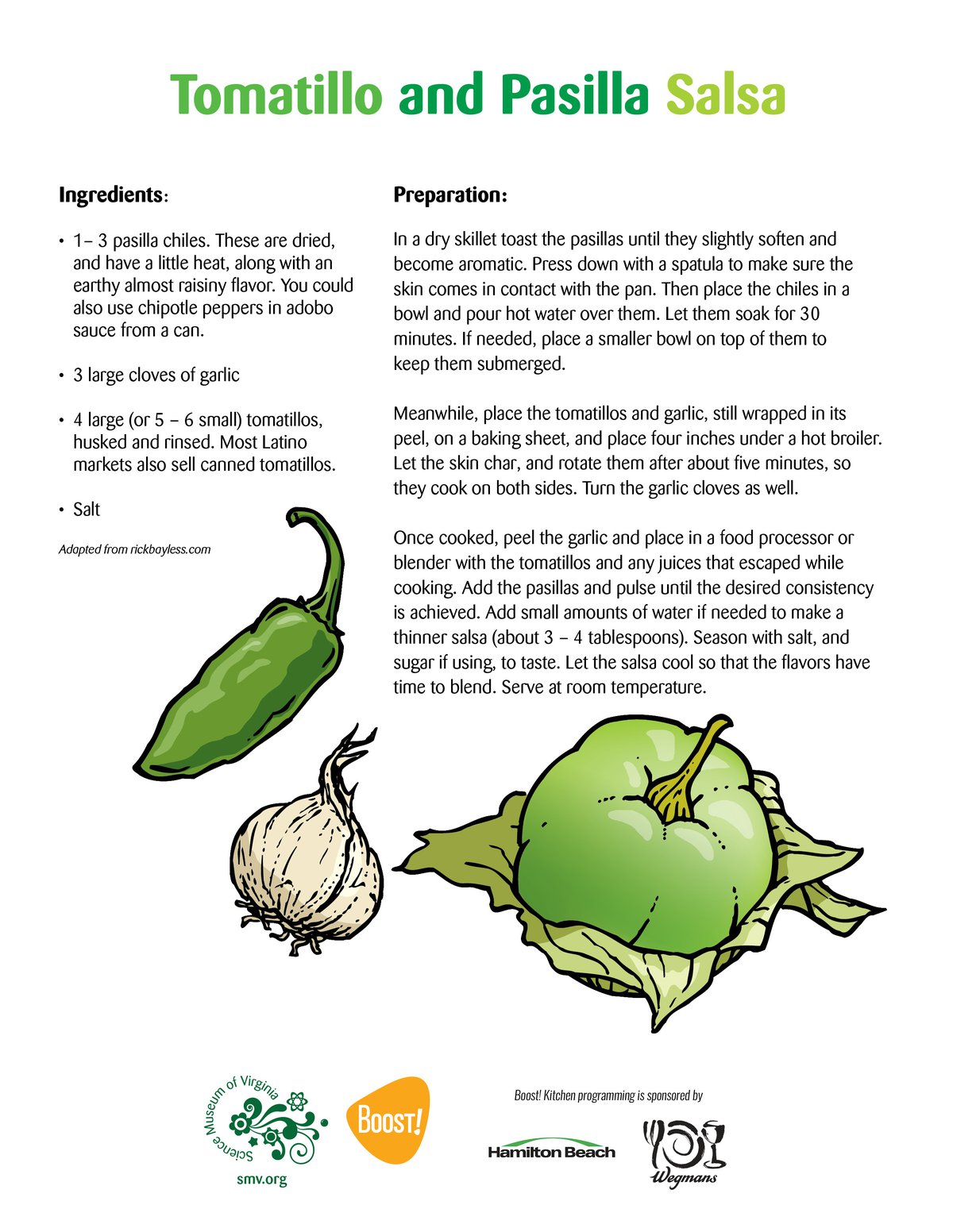 Optional: If you want to cut down on the tanginess of this salsa, add a pinch of sugar. Other common ingredients for salsa verde are lime juice and fresh cilantro.

This style of salsa focuses on the flavors of the chiles. It is earthy, spicy and very flavorful. 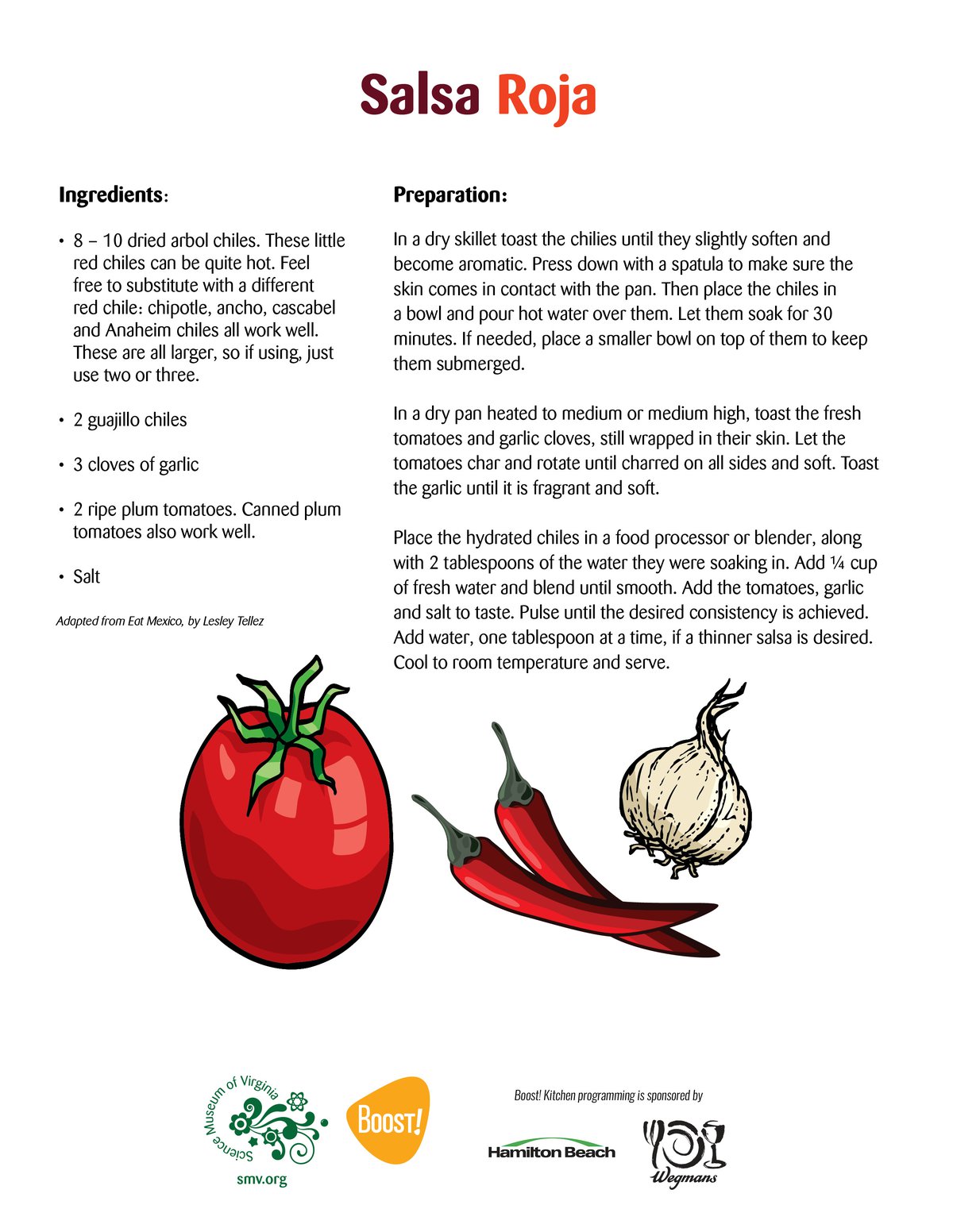 If you’re looking for a more common, tomato-based, restaurant-style red salsa, use one or two more tomatoes, and just a couple jalapenos instead. Cilantro, lime juice and half an onion should also be added.