The Science Behind Peanut Allergies

National Peanut Day is Sunday, September 13. While 94 percent of all US households have a jar of peanut butter in the pantry -- and that’s 540 peanuts per 12oz jar! -- there are those whose lives depend on NOT having a single peanut in the house.

An allergic reaction happens when our immune system mistakenly identifies something benign (not harmful) as dangerous, and it mounts a full-scale attack. For some people, that’s a protein found in peanuts. 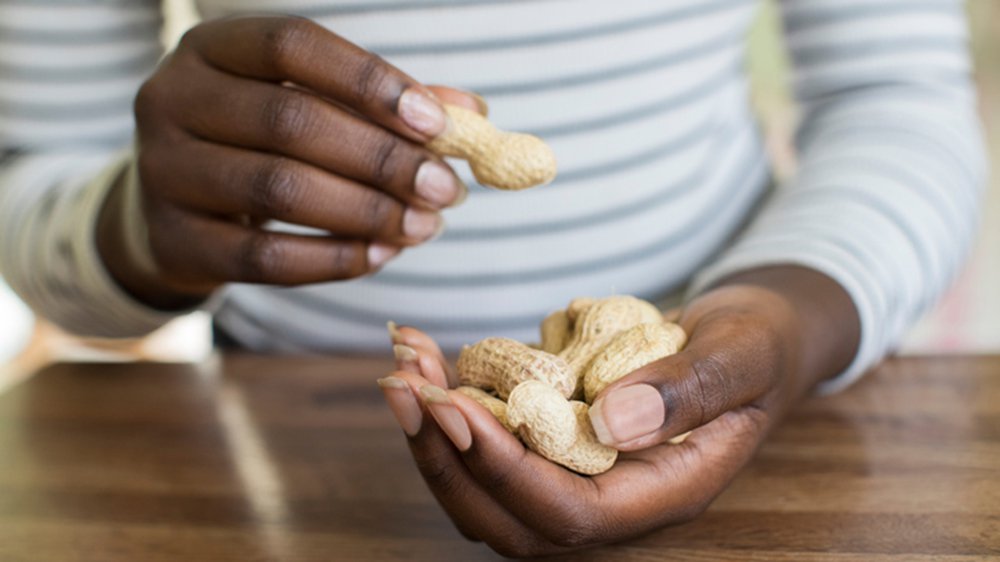 Peanut allergies were relatively rare until a few decades ago. In the 1990s, pediatricians, allergists and other medical professionals began noticing a significant rise in peanut allergies. The reasons for this allergy epidemic are still unknown, but key hypotheses integrate biological, genetic and environmental factors. Studying other similar allergy epidemics over the past two centuries (like hay-fever and ragweed) is giving scientists clues.

So, how many people are allergic to peanuts and how serious is this? Between 1-3 percent of Americans are allergic to peanuts (roughly 1 in 50 children and 1 in 200 adults). Peanut allergy is the second most common food allergy in children under 18, and the most common cause of food allergy anaphylaxis and death. Peanut allergies are usually lifelong, but about 20 percent of children outgrow them.

Like other food allergies, symptoms of peanut allergy include stomach ache, runny nose, itchy eyes, hives and/or tingling of lips and tongue. Medical professionals are working to identify peanut allergies early, because if there is ongoing exposure, even in small amounts, it can take less and less to cause a reaction as time goes by. This is because repeated exposure boosts the immune response, and the IgE antibody levels rise. Preventing sensitization by exposure early can prevent anaphylaxis and fatalities. So how do you know if a baby who’s never been exposed to a peanut might need to be tested? Peanut allergy is more common among infants who develop eczema early in infancy. 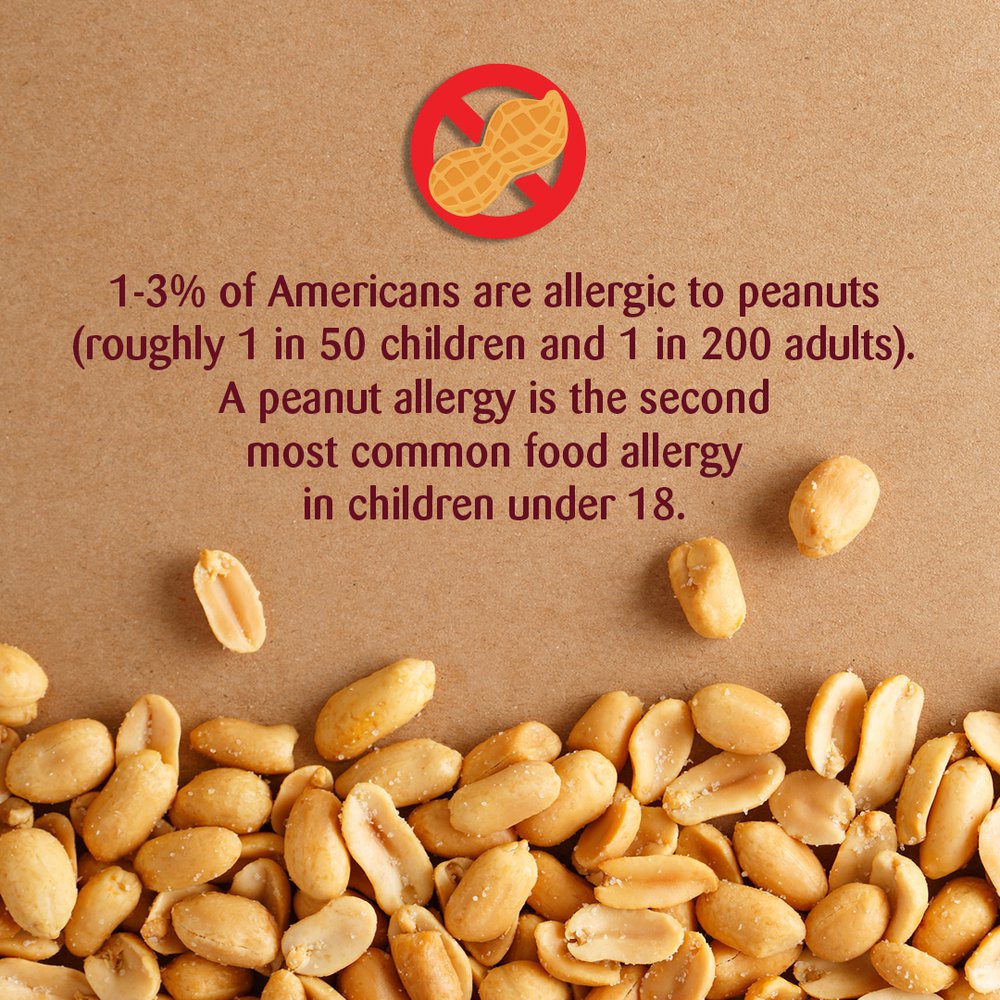 Peanuts are actually legumes and grow underground, so their protein structures are somewhat different from tree nuts. About 30 percent of people with peanut allergies are also allergic to tree nuts (almonds, brazil nuts, cashews, hazelnuts, pecans and walnuts). Other peanut allergy sufferers find they are allergic to other seeds or legumes (soybeans are one of the so-called “big 8 allergens”).

Exposure to peanuts that induce allergies can include ingestion, of course, but also contact and inhalation. Imagine going to a baseball game and a friend who’s been shelling and eating peanuts reaches over and swats a fly off your shoulder. That hand-to-shoulder contact can cause a serious allergic reaction in ~11 percent of peanut allergy cases. Just inhaling the peanut dust can cause allergic reactions in ~2 percent of cases. 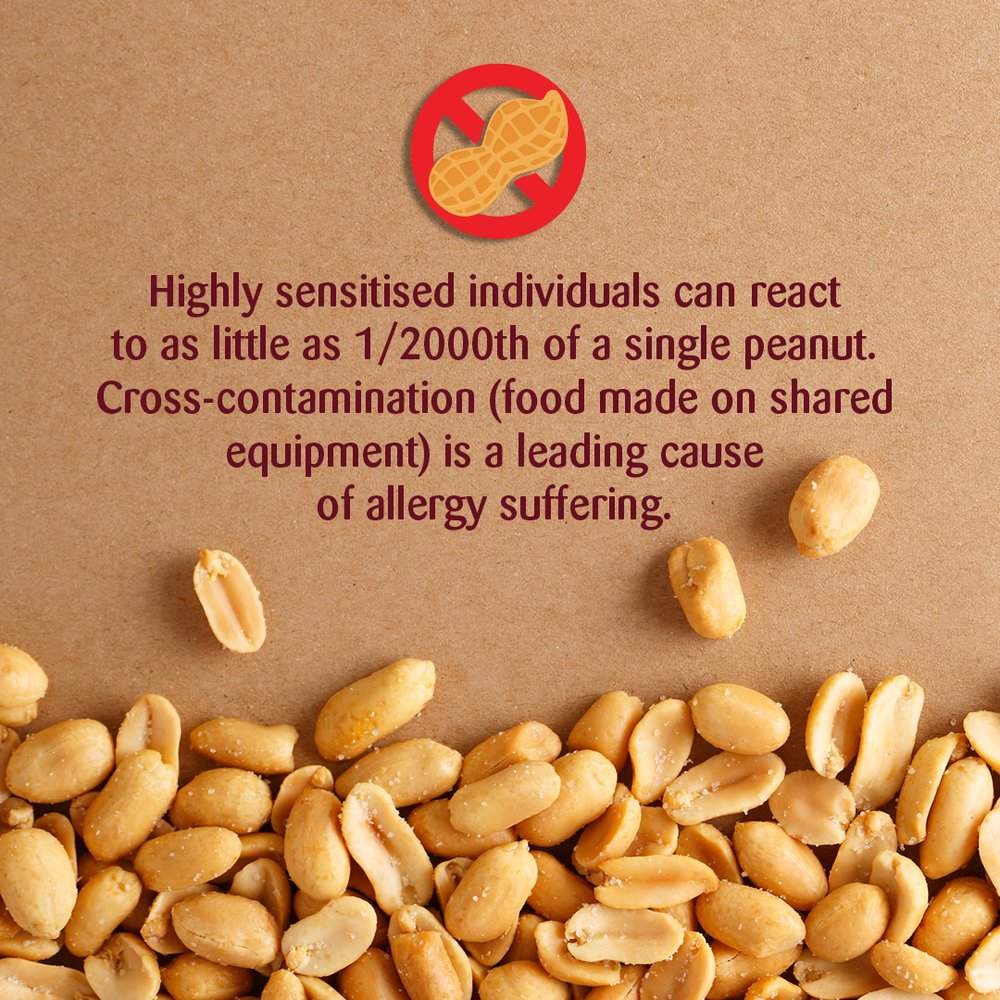 It’s been calculated that highly sensitised individuals can react to as little as 1/2000th of a single peanut. In research studies of adults with a known peanut allergy the amount varied from one tiny fragment to two peanuts. Cross-contamination is a leading cause of allergy suffering, that is, things made on shared equipment.

For families with a peanut-allergic individual, it’s important not only not to have a jar of peanut butter, but not to have any trace of peanuts in the house. While peanut allergies are no laughing matter, hopefully this Peanuts comic strip gives you a chuckle as you celebrate National Peanut Day!