Hello from the Animal Lab! If you’ve visited that part of the Museum, you know it’s full of dozens of reptiles, amphibians and arthropods and each has an interesting story to tell. You may remember meeting our orange-patterned western hognose snake (Heterodon nasicus) who lives in there. That small serpent also has an interesting story, but it’s not about the habitat or hunting patterns like you might think.

When we got the snake, we named it Napoleon. Recently this little snake gave us quite a surprise when we discovered that Napoleon was going to lay eggs. It seems we were mistaken when we assumed our snake was a male. 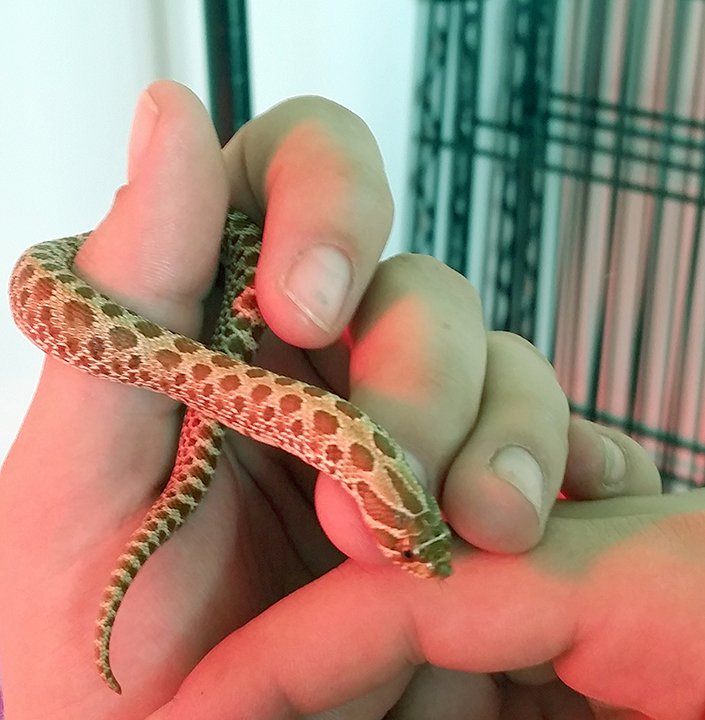 The Museum acquired the hognose snake as well as a milk snake as juveniles in October 2017. Both were quite small. We selected these types of snake because of their amazingly cool adaptations, and for a museum educator, there’s almost nothing more fun than sharing cool animal facts with guests!

Hognose snakes are famous for “playing dead” when scared. They will flip over upside down, their tongue will hang out of their mouths and they will release a foul-smelling substance from their cloaca—all to seem dead so the suspected predator leaves them alone. After the threat has gone, the snake flips itself back over and slithers away.

The pattern of hognose snakes closely resembles that of venomous snakes such as rattlesnake or copperheads, and hognose will often “puff up” and hiss as if they were a deadly viper. This trait explains why some other common names for hognose snakes include puff adder, blow snake and, my personal favorite, “spead’em outer.”  Hognose snakes, although not nearly as venomous as a copperhead, are mildly venomous. They have fangs in the rear of their upper jaws that have a mild toxin that helps them capture and deflate their favorite prey: toads. 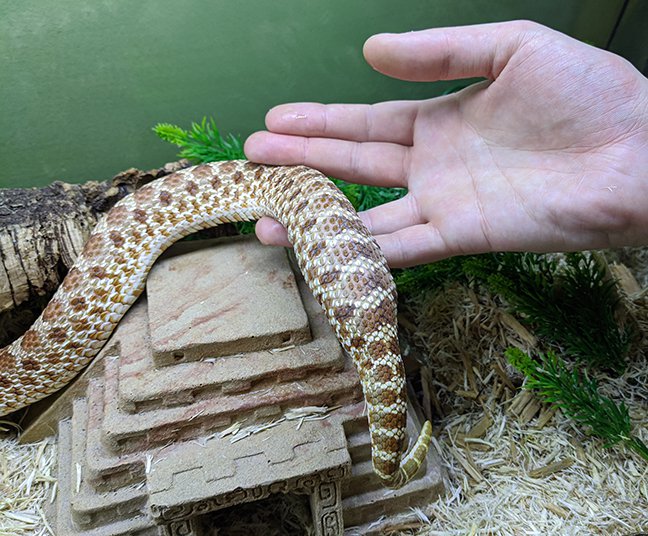 When we acquired our new baby snakes three years ago, the breeder had sexed the milk snake and identified it as a male but the little hognose was too small for the procedure. For many species of snake, it is not easy to tell if they are male or female. In some species, the males might have a slightly thicker, longer tail but it is very subtle. To truly determine the sex of a snake, you must carefully perform a procedure called “probing”—it’s about as fun for the snake as it sounds—to observe the snake’s sexual organs. In captivity, unless you are breeding the snakes, it does not really matter if you know. So, our little snake came to the Museum and acquired the name Napoleon.

Fast forward to April 2020, when the hognose snake’s keepers noticed a swelling around the cloaca/vent. Being cautious, the Museum took Napoleon to the veterinarian. When the vet examined Napoleon, they discovered the reason for the swelling: Napoleon was full of eggs! 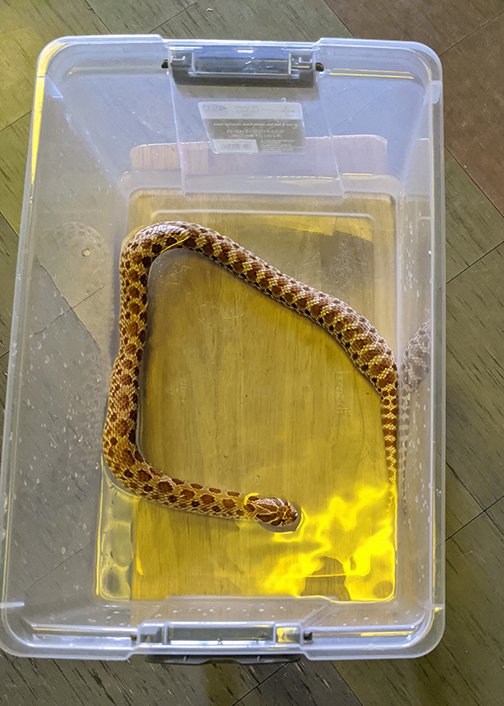 Some snakes and turtles, just like chickens, can lay eggs that are not fertilized. These eggs would never hatch, but they were impacting Napoleon’s health. Per the vet’s orders, we gave her a series of daily spa treatments in warm soaking water to encourage her to pass the eggs. When this didn’t work, she went to a special reptile vet for aspiration (the vet removed all of the eggs) followed by a round of antibiotic injections to guard against a possible infection.

Good news: Napoleon has recovered nicely. As western hognose snakes can live up to 20 years in captivity, she should have many more years in our Animal Lab and can’t wait to greet visitors again at the Museum.

As for the name: there was discussion about whether a name change is in order. You might be thinking that Napoleon is now an even more fitting name for our snake as, like the famous French military leader, she is small but mighty, overcoming this obstacle and creating an interesting story people will tell for years to come. But, in fact, Napoleon is named after a different story all together: as it's a hognose, staff were looking for pig-inspired characters and she is actually named after the hog in “Animal Farm.” Equally as interesting!