With all the vaccine news out there, and more filling your stream every few minutes, it’s sometimes hard to know which articles to click on to get helpful information. Because of this, we thought we’d have our science experts take a shot at recommending the articles that have stood out to them from the past few weeks to clearly communicate important vaccine and science messages.

And lastly, while not an article, Virginia Department of Health’s December 4 announcement about the commonwealth’s vaccination priorities is certainly on the recommended reading list when discussing the vaccine. In that plan, the state health department laid out the plan for administering 480,000 doses of the novel coronavirus vaccine by the end of the year. https://www.vdh.virginia.gov/news/2020-news-releases/virginias-covid-19-vaccination-priorities-announced/ 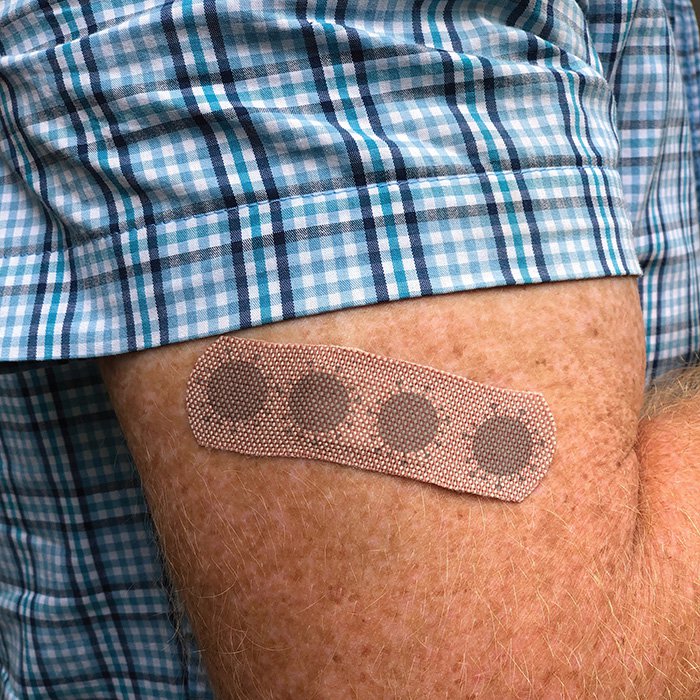 We have a team of very talented subject matter experts at the Museum, but we don’t have an immunologist on staff. After getting through our suggested reading list, you might still have some questions so we asked Dr. Nidhi Kedia Mehta if she could share some answers to the most common questions she gets about vaccines. Dr. Mehta holds a PhD in immunology, and is currently working at the University College Dublin and Maynooth University in Ireland. Here’s what an immunologist wants you to know about vaccines.

Q: What is a vaccine, and what does it do?

To understand what a vaccine is and what it does, we first need to understand the immune system. We all contain immune systems within our bodies. This complex system is comprised of different cell types that each have specialized function. It can be thought of as an army that is organized to defend our bodies against various pathogens (infection-causing bugs) that may invade them. Some cells, called innate cells, are always at the ready, patrolling the body for any unseen threat. Once they encounter something, they get busy, first recognizing the exact threat and then eliminating it.

The “under the weather” feeling we get when we catch an infection is the immune system hard at work causing inflammation, fever and pain to contain the intruder. Once the immediate threat has been contained, the innate cells notify another set of cells, called the adaptive cells, by showing them a piece of the pathogen called the “antigen.”

Adaptive cells work to record and memorize the threat that the body encountered. They store this information in the form of antibodies that are created specifically for each new antigen that is encountered by the immune system. This record helps them to act more quickly and efficiently should a similar pathogen show up again. This second attack is so potent that we don’t feel the effects of an infection at all. A subsequent infection by the same pathogen can be compared to someone trying to enter a movie without a ticket: the usher will stop them before they can enter. This is known as the state of being immune to an infection.

A vaccine is part of, or the whole, virus that has been inactivated or weakened in such a way that it can no longer cause disease, but it induces a similar, milder immune response. The purpose of vaccination is to introduce an antigen that the immune system can recognize on an actual infective pathogen. The importance of the milder vaccine-induced immune response is to train the immune system against the pathogen for which the vaccine is made. Once vaccinated, the immune system should be able to immediately contain or deport the pathogen should it try to invade the host in the future.

Q: If a vaccine is actually putting part of a virus into the body, isn’t it dangerous?

When a virus infects a human host, it replicates to create more copies of itself and then infect multiple other cells, and multiple other humans through an infected human. A vaccine can be 1. made of a weakened virus which can replicate but cause only a mild disease or 2. made by using an inactivated virus that is no longer able to replicate and therefore cause a disease but provide the immune system information to get trained and be ready for an actual infection.

Vaccines made of weakened viruses, also called live attenuated virus, cannot be given to certain vulnerable groups such as pregnant women. However, for most of the population these vaccines are a lot safer than contracting the full-strength pathogen itself in the form of an infection. Most vaccines in use currently are made this way and are successfully containing many infectious diseases that used to be fatal in children, such as measles and rubella. Newer vaccines are now made with either inactivated viruses or parts of a pathogen (antigens), and can be made much quicker and are generally safe for all groups of a population.

The new COVID vaccine uses mRNA, or genetic data, for the spike protein of the virus. Like a computer monitor is useless without a keyboard and a processor, so is a part of a virus useless without the rest of its components.

No, getting vaccinated will not make you sick. Although some people develop flu-like symptoms, this does not mean they have contracted the disease. It just means their immune system has seen a foreign particle for the first time in the form of the vaccine and is busy recording it and developing an immune memory for that particle or antigen. The next time the immune system sees that particle again, now in the form of the virus itself, it will know what to do and contain the virus before it can multiply enough to overwhelm the immune system.

Q: Can you give a disease to other people from getting the vaccine for it?

Not only can you not give a disease to other people from getting the vaccine for it, you are protected against the disease. In fact, the more people get vaccinated, the more un-vaccinated people are protected by herd immunity as there are more immune people around rather than potential hosts for the virus to spread through a population. Herd immunity is incredibly important within a population that may also include certain vulnerable groups of people who may not be given vaccines, such as people undergoing chemotherapy, pregnant women, etc.

Q: Can you give some examples of successful vaccines?

Modern medicine has eradicated or controlled many infectious diseases that used to be life altering. The reason we no longer see people suffering from debilitating and even fatal infections like smallpox and polio (in most of the world) is because of successful vaccinations.

We no longer fear simple injuries that could lead to infections causing severe, even fatal, muscle spasms thanks to the tetanus vaccine. Hepatitis infections can become chronic or long standing, and can lead to liver damage or liver cancer. Fortunately, we have a vaccine for hepatitis B, and the search for a hepatitis C vaccine is ongoing.

And one last example is the vaccine against Human Papilloma Virus, or HPV, which greatly reduces the risk of cervical cancers.

Q: How do scientists know that a vaccine is safe and effective?

Scientists work on designing the vaccines in the labs first, and then perform clinical trials. A clinical trial is usually done in three or four phases.

The third phase of the trial looks at the effects of vaccines in an even bigger population involving several thousand volunteers. Those volunteers are compared to people who did not get vaccinated. The bigger the numbers tested, the stronger the evidence that a vaccine is safe and effective.

Earlier vaccines were tested over a period of 10 to 15 years. This process has sped up a lot now as more knowledge has accumulated in vaccinology. We have more advanced technologies that make large statistical calculations and quicker follow ups of large populations possible. The recent COVID-19 vaccine development was further sped up as the trial phases were overlapped and a huge amount of money made available for mass production of the vaccines considering the urgency to contain the current pandemic.

As far as the chemicals used in vaccine manufacture are concerned, they often help to make the vaccine more effective and long lasting. Here’s a list of common additives in vaccines and why they are added. 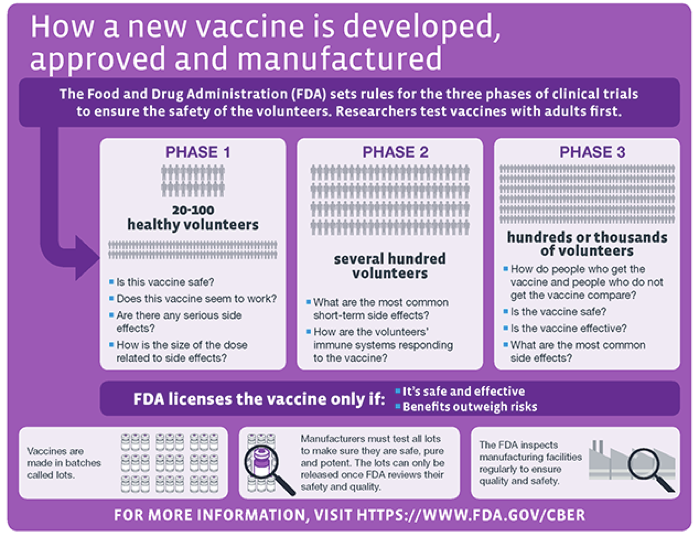 Q: Isn’t it better to just get diseases naturally and develop immunity that way?

Although getting a disease and surviving it will make you immune to it, there’s no guarantee if everyone would survive that disease. Some people may develop lifelong complications from the disease (such as joint weakness or muscle wasting from polio), and some may die. Infected people who will eventually survive may spread the disease to others who may not survive. Therefore, it is better to get vaccinated to avoid getting the infection.

We don’t know how we might react to certain diseases. Some groups, such as children and older people, are more vulnerable and may react adversely to an infection. Some diseases like rubella are fatal to unborn babies and therefore pregnant women cannot risk getting the disease. People living with obesity -- as has been evident in the recent pandemic -- or malnourishment may also react adversely to infections. Many people, especially children, still die in developing countries with diseases that are very much preventable because of poverty, malnourishment and low access to vaccines.

Q: What are some of the risks for people with obesity and related health conditions when making the choice to get vaccinated or not?

There are no known risks for individuals living with obesity or related health conditions, such as cardiovascular disease and diabetes, of getting vaccinated, however there are certain conditions in which individuals may be advised to delay or avoid getting vaccinated. For example, pregnant individuals cannot get a MMR, HPV, nasal flu and varicella vaccine. Certain individuals with a weakened immune system may also be advised to avoid vaccinations that are made from live attenuated viruses, which include chickenpox, nasal flu and oral polio. These individuals include those with AIDS, bone or blood cancers, those receiving chemotherapy and those who recently underwent transplant. However, more and more vaccines are now made from inactivated viruses and can be administered safely to immunocompromised individuals. It is however prudent for the family members and close contacts of immunocompromised and pregnant individuals to get properly vaccinated to protect them from preventable diseases as they are more susceptible because of their weakened immune system.

People who have had severe allergic reactions to certain vaccines in the past may also be advised against them.

Obesity stood out as a risk factor for severe disease during both the 2009 swine flu pandemic and the ongoing Covid-19 pandemic. Not only are individuals with obesity and other related disorders (like cardiovascular diseases, diabetes and metabolic syndrome) at an increased risk for developing severe disease in response to infections, they are also less likely to maintain prolonged immunity to vaccinations. This could be explained by the recent research which shows the immune system of individuals with obesity is greatly impaired. There is emerging evidence that individuals living with obesity have impaired responses to vaccinations like tetanus, hepatitis B and flu. They may develop an immune response to vaccination, but they may not have immunity for the vaccination for an extended period and may need further boosters.

We hope this information has helped you feel informed, inspired and motivated to enter 2021 with confidence that a vaccine can and will have a positive impact on the current pandemic. Stay up-to-date with all our vaccine coverage at www.smv.org/vaccines.

Question Your World: Do Masks Prevent Us from Recognizing Faces?

Smallpox: The Scientific History from Variolation to Vaccination

Question Your World: Can Llamas Help Combat the Coronavirus?