Question Your World: What Does It Take to Fly a Helicopter on Mars?

The science community had some great news to start off this week: a historic first-ever powered and controlled flight on another planet! There are a lot of articles being shared all over the world regarding this massive achievement, but we wanted to take a moment to explore how something like this is possible in the first place. Earth and Mars are two totally different environments, especially when we’re talking about atmospheric pressure, vital for designing flying machines. What does it take to fly a helicopter on Mars?

ScienceMuseumofVA · Question Your World - What does it take to fly a helicopter on Mars?

The Ingenuity helicopter was carried to Mars by the Perseverance rover, and the helicopter team was given a 30-day test period before the rover will move on with its own mission. Scientists are very excited to use this brief window of time to test a flying machine on another planet.

During this historic flight, Ingenuity flew up about 10 feet – the height of a basketball hoop – but the next few flights will be higher and further as scientists put their groundbreaking technology to the test!

One of the most impressive elements of this story is designing the helicopter to work on a very different planet. Atmospheric density on Mars is very low, less than 1% of Earth’s. This means a helicopter designed to fly on Earth simply would not be able to generate the lift needed to take off. To address this, NASA incorporated a number of unique design features. 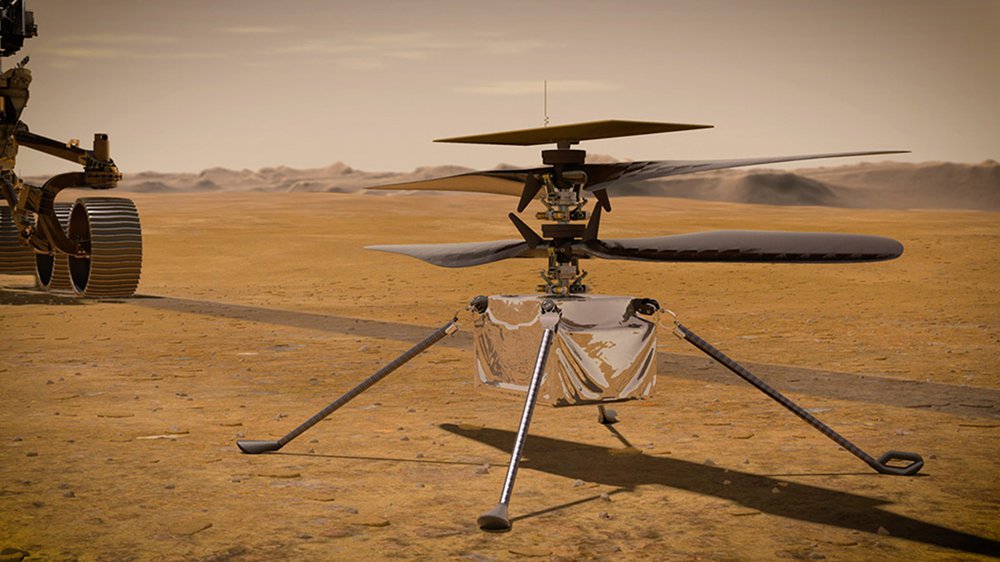 For starters, Ingenuity’s blades are unusually large for the size of the craft. The environment on Mars also calls for the blades to spin at a much higher rate. Typical chopper blades on Earth rotate around 500 rpm, the Ingenuity blades clock in at 2,500 rpm, about 5 times faster! In addition to this, scientists had to design special computational components, solar panels for self charging, and everything else needed ... which could weigh just four pounds! Limiting mass was definitely a concern, but scientists did manage to put a little bit of the Wright brothers plane on this helicopter to celebrate the first flight on Earth during the first flight on another world.

To dig even deeper into this, we had a chance to ask the Science Museum of Virginia’s resident astronomer, Justin Bartel a few questions about this mission and the potential futures for this kind of technology.

With the success of this mission, what are some things you hope to see in the works in near future?

The next step would be to integrate a rotorcraft into the normal operations of a long-duration mission. Once Ingenuity's tests are done, Perseverance will move on and begin its mission in earnest, but it would be great if future rovers had the ability to scout future locations from the air first. This might help them identify scientifically interesting spots and avoid hazards that are difficult to identify using cameras orbiting much higher above the surface of Mars.

How many teams/people were involved in the making of this Ingenuity mission? Any thing in that realm that stands out as unique or cool?

Ingenuity is operated by a team of scientists at engineers at NASA's Jet Propulsion Laboratory (JPL), though they had input from partners around the country. Here's a picture of the team from a couple years ago showing some of the dozens of people involved in this success. Flying may be a new part of NASA's missions on other planets but aeronautics has always been a core part of what NASA does, so some experts of flying on Earth at NASA's Ames Research Center and Langley Research Center (right here in Virginia!) contributed to the success of Ingenuity's flights on Mars. 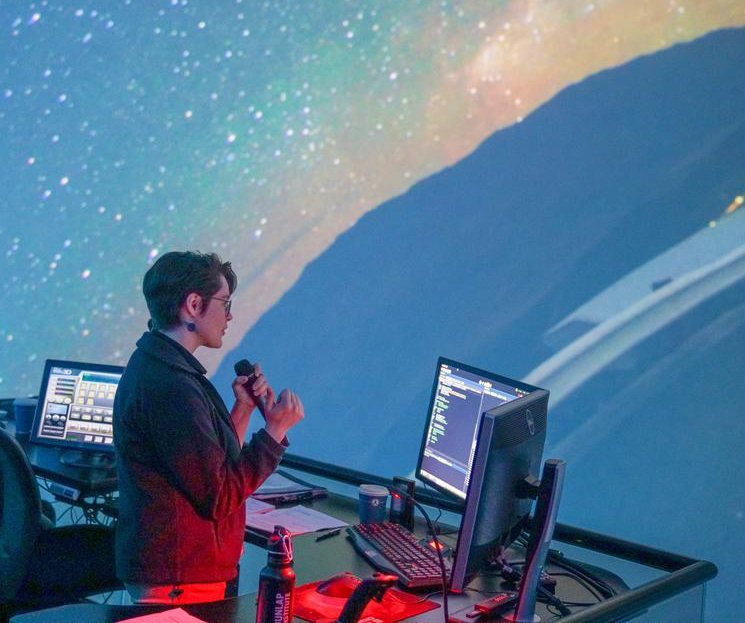 Our Dome crew keeping guests updated on activity on Mars.

How could missions like Ingenuity play a role in the future of space exploration for both robotic and human-based missions?

Ingenuity is a technology demonstration meant to pave the way for future advancements. NASA is already planning to fly a rotorcraft on another world in the not-too-distant future with the Dragonfly mission to Saturn's moon Titan. Although the conditions are very different there, perhaps some of the testing and design processes that made Ingenuity successful will benefit the Dragonfly team as they move closer to building and launching their spacecraft.

There's another exciting technology demonstration on Perseverance called MOXIE. This instrument is testing our ability to extract oxygen from the carbon dioxide in the Martian atmosphere. Because of the small scale of MOXIE, it's not able to generate much oxygen, but it's already successfully shown that the process works!

Technology built on the foundations provided by MOXIE could provide ample oxygen for future human explorers to breath, as well as oxygen needed to light their rocket engines for the trip home — if those future astronauts can also fly remote control drones to extend their vision above their surroundings and perhaps limit the need for higher risk EVAs to monitor whatever equipment or habitat is sustaining them on the surface, it could make Mars exploration a bit safer than we'd previously imagined.

Check out Justin and our astronomy crew at the Museum in The Dome for more Mars and space news updates! And stay tuned for more updates from these test flights as they happen as well. As far as mission objectives go, Ingenuity has already passed with flying colors.

Volcanoes of Our Solar System

Question Your World: Why Is the Opportunity Rover So Important to Science?