Through a $500,000 gift from Richmond philanthropists David S. Cohn, Esq. and Jane B. Cohn, the Science Museum of Virginia is establishing the Cohn Scientist Endowment Fund. The donation will be used to support the newly created David and Jane Cohn Scientist staff position. The Museum will bestow the new title on Jeremy Hoffman, Ph.D., whose community-centered urban heat island and redlining research has received acclaim from the scientific community and international media attention.

Mr. and Mrs. Cohn have been involved with the Museum for more than three decades, and have made charitable contributions to the organization in the past. Mr. Cohn was a Science Museum of Virginia Foundation board member from 1987 through 2001, serving as president for two of those years. He is a former decade-long Museum trustee, serving as chair of that governing body as well, and is currently a member of the organization’s advisory council.

In addition to his Museum service, Mr. Cohn has extensive community involvement experience with Goodwill Industries of Central and Coastal Virginia, Inc., the Better Housing Coalition, the Massey Cancer Center Advisory Board, the Governor's Commission on Efficiency in Government, the Governor's Regulatory Reform Advisory Board and the Virginia Historic Landmarks Board, among many others.

A graduate of the University of Pennsylvania and Harvard Law School, and student for a year at the Harvard Business School, Mr. Cohn has practiced law for nearly 50 years. A partner at the law firm Troutman Pepper in its Richmond, New York City and Shanghai, China offices, his career focuses include structured finance, private equity law and real estate development and syndication.

“We hope to further the Museum's mission of introducing all Virginians to the wonders of science, technology, engineering and math, and exciting some to pursue careers in these disciplines,” Mr. Cohn said. “This mission enriches everyone and the staff scientist is an essential part of it. Our endowment is intended to help the staff scientist succeed by increasing available financial resources. We are privileged to have Dr. Hoffman as its first beneficiary.”

Hoffman is a nationally recognized research scientist and science communicator on the broad impacts of climate change, including health and environmental inequity, paleoclimatology, urban microclimatology, climate resilience and phenology. In 2017, he led a community science heat-mapping project to record temperatures in neighborhoods across Richmond during a heat wave. The research, which showed discrepancies of up to 16 degrees Fahrenheit, prompted heat-mapping campaigns across the country in the following years. In 2020, Hoffman published a widely cited study of the disparity in extreme heat between formerly redlined and non-redlined neighborhoods. 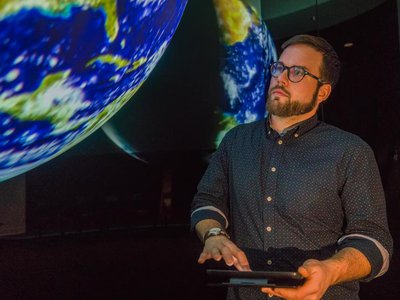 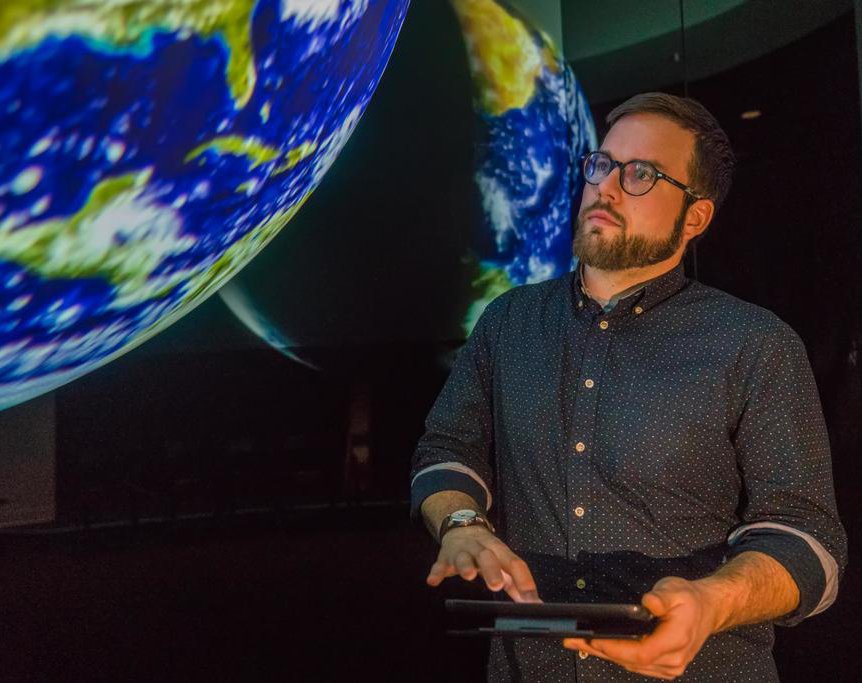 Hoffman’s climate-related work has led to speaking invitations have included the U.S. Environmental Protection Agency, the U.S. Department of Energy, the National Oceanic and Atmospheric Administration, the U.S. Democratic House Caucus, the Virginia Department of Environmental Quality, the Federal Reserve Bank and the Medical Consortium for Climate and Health. Hoffman has served as a member of numerous scientific advisory committees and local boards, and has won several awards. Hoffman joined the Museum’s team in 2016 after earning his Ph.D. from Oregon State University. In addition to inspiring the next generation of critical thinkers through Museum programs and content, Hoffman is also an affiliate faculty member in the L. Douglas Wilder School of Government and Public Affairs and the Center for Environmental Studies at Virginia Commonwealth University.

“I am humbled by the confidence and support Mr. and Mrs. Cohn have shown in my passion for connecting audiences to the world around them, and am honored to be the inaugural David and Jane Cohn Scientist,” said Hoffman. “I look forward to continuing my efforts to bring the public and science closer together to achieve lasting, positive change in our community.”

Since the Museum was founded in 1977, it has had four staff scientists: a physicist, a biologist, a climatologist and a neuroscientist. Having an in-house expert is critical to Museum operations and programming as the scientist assists with exhibit development, educational content, grant-funded projects, community partnerships and special research-based initiatives.

“The Museum’s strength lies in its ability to enrich and inspire,” said Chief Wonder Officer Richard Conti. “Endowing this critical position will ensure we have the resources necessary to connect relevant scientific research to the daily lives of our audiences.”