10 for 10: A Decade of Science Suggestions

When you were a kid, did you make a holiday or birthday wish list to let all the gift givers know what you wanted? What if you would have had to make a wish list that covered the next ten years of gifting recommendations? What if your top requests had to be decided a decade in advance to guide decisions by parents, grandparents, siblings and friends … could you have done that? Could you do it now?

Well, that’s exactly what happens in the scientific community! Every ten years, scientists from various STEM branches gather to take stock of their fields and write a wish list for the years ahead. The ten-year timeline of these reports earns them their formal name: a decadal survey. 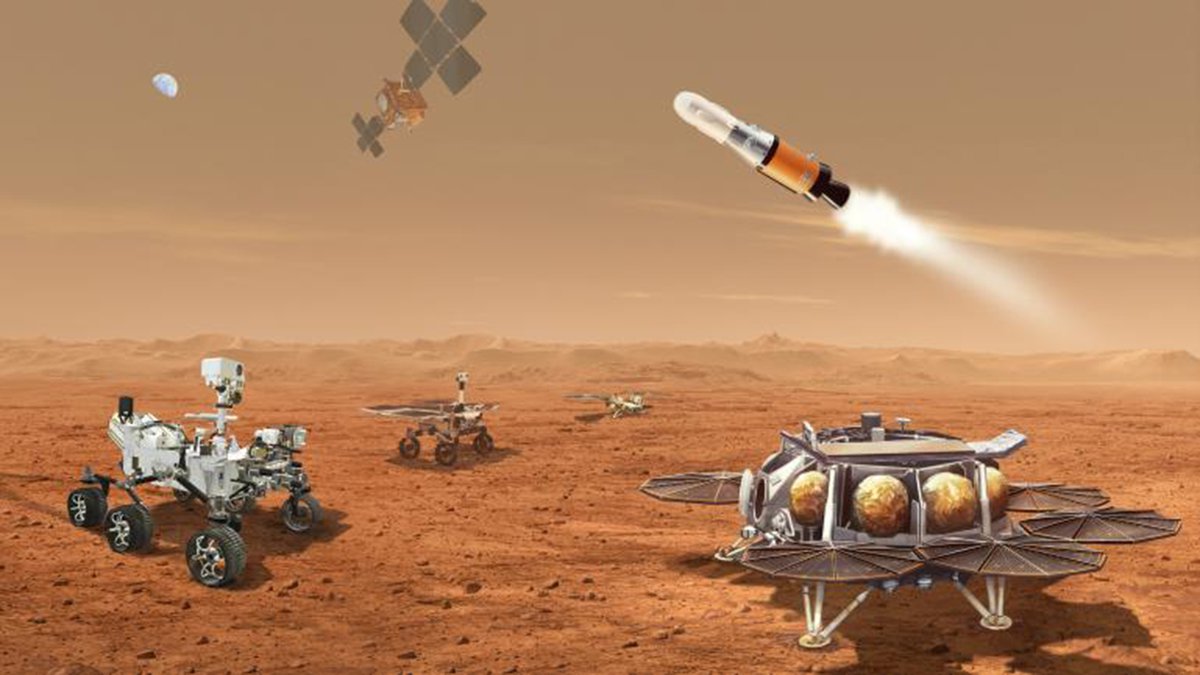 This illustration shows a concept for multiple robots that would team up to ferry to Earth samples collected from the Mars surface by NASA's Mars Perseverance rover. Image credit: NASA/ESA/JPL-Caltech

Published through the National Academies of Sciences, Engineering, and Medicine, these reports help guide top-level decision making at various federal agencies, Congress and the White House. Except this list is not about gifts, but instead about charting a course for future scientific endeavors.

You can find decadal surveys for everything from behavioral science to aeronautics. One of the most recent is titled “Origins, Worlds, and Life: A Decadal Strategy for Planetary Science and Astrobiology 2023-2032.” This report will help NASA write their to-do list for the next decade, determining which missions get prepared for launch and which never get off the drawing board.

We’ve already covered the report’s top recommendation, a mission to Uranus, but the full publication is over 700 pages so it contains many other suggestions that could lead to major discoveries in the near future. We’d never discourage you from reading the whole report for yourself, but for your convenience and in no particular order, here are ten more recommendations that will help advance planetary science in the next ten years.

1) The Moon is already slated to be a popular destination for spacecraft in the near future, with several uncrewed missions targeting launch dates in 2022. The decadal survey highlighted the importance of focusing on science during upcoming human missions. The Endurance-A mission concept recommended connection between robotic and crewed exploration. If funded, this mission would involve sending a robotic rover to a giant ancient impact basin on the far side of the Moon to collect samples and carry them close to the lunar south pole. This would place the samples within reach of the Artemis astronauts when they arrive on the Moon’s surface.

This view of Uranus was recorded by Voyager 2 on Jan 25, 1986, as the spacecraft left the planet behind. The thin crescent of the pale blue-green colored Uranus is seen here at an angle of 153 degrees between the spacecraft, the planet and the Sun. Image credit: NASA/JPL

2) On Mars, the goals of the Perseverance rover follow the recommendations of the previous decadal survey. This time around, planetary scientists opted to acknowledge the steps already taken in returning samples of Martian rocks, and recommend the Mars Sample Return mission be completed as soon as possible without increasing or decreasing the complexity of the current plan. This ranks as the highest priority robotic mission for the next decade, so any delays would affect plans farther down the line.

3) The next Mars mission recommended for development is Mars Life Explorer, a lander that would borrow major design elements from the Phoenix and InSight missions while carrying instruments designed to detect signs of current life in potentially habitable environments just below the Martian surface.

4) As for looking for extant life in the solar system, should NASA still have money to spend after finishing Mars Sample Return and launching the Uranus mission, the next priority for a flagship mission should be scrutinizing Saturn’s moon Enceladus. When the Cassini mission was in the neighborhood, it discovered plumes of material erupting from the south pole of Enceladus and eventually found them to be mineral-rich geysers of water being fed by an underground ocean. The decadal survey recommends the probe land on the moon’s surface to analyze plume material with dedicated instruments and search for signs of life.

5) In a first for the planetary decadal, the authors weighed in on NASA’s planetary defense (read: asteroid protection) program. Currently, our efforts largely consist of watching the night skies and trying to discover as many asteroids as possible so we have plenty of warning if any are found on a dangerous trajectory. Currently, our most productive asteroid discovery telescopes are on the ground but a space-based telescope could help us find even more of them. A recently approved mission, NEO Surveyor, is set to have its launch delayed a couple years in NASA’s latest budget request due to cost overruns in other projects, but the decadal survey recommends more robust support for planetary defense and may help get NEO Surveyor’s original launch date restored.

6) Full support for planetary defense includes planning our response to incoming threats. This year, NASA’s DART mission will test one method of deflecting an asteroid, and the decadal survey suggests following this up with a dedicated flyby mission to another asteroid to better characterize the sort of high-risk near-Earth objects we may have to deal with down the road. A separate recommendation encourages using all available assets to investigate the asteroid Apophis during its close approach in 2029, and NASA has already taken one step in this direction with the recent extension of the OSIRIS-REx mission to visit Apophis just after its encounter with Earth. 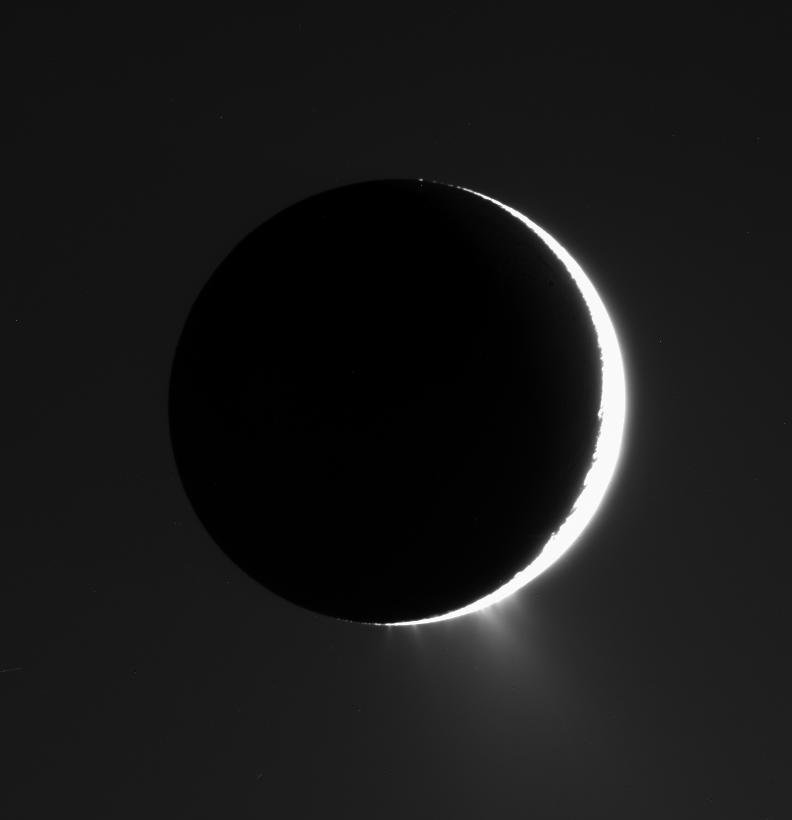 Enceladus is the sixth-largest moon of Saturn. This image was taken in 2007 by the Cassini Orbiter. Enceladus is nearly in front of the Sun from Cassini's viewpoint, and its icy jets are clearly visible against the background. Image credit: NASA/JPL/Space Science Institute

7) Speaking of OSIRIS-Rex, that mission originally received its funding through NASA’s New Frontiers program. Every few years, a new mission is selected from proposals submitted by planetary scientists to address a specific theme set by the decadal survey. This report provided a list of possible goals for upcoming missions: a centaur orbiter and lander; Ceres sample return; comet surface sample return; an Enceladus multiple flyby mission; a Lunar Geophysical Network; a Saturn atmospheric probe; a Titan orbiter; a Venus lander and a Triton multiple flyby mission. NASA may select a mission to address one of these themes as soon as 2024.

8) Competitive programs like New Frontiers ensure all sorts of destinations can be scrutinized by spacecraft—we can’t spend all our time and money studying Mars! Just as planetary scientists are eager to explore the full diversity of worlds in the solar system, they’re curious about the diversity of voices in their own field. Enter a new addition to this decadal survey: a chapter examining the state of the planetary science and astrobiology profession. It covers everything from identifying the pathways through which scientists become planetary scientists (most people who have that job title hold a degree in some other related field such as geology or physics) to ensuring a level playing field for everyone trying to contribute to the profession. Recommendations for the coming decade include researching the current demographics of the planetary science community, combating bias that influences recruiting and funding opportunities and taking tangible steps toward ensuring NASA mission teams reflect the diversity of the wider planetary science community.

9) For most of the profession’s history, remote means (telescopes, robotic spacecraft) have done most of the planetary science data gathering. With NASA looking to send humans back to the Moon and then to Mars, planetary scientists would like to ensure these human missions are designed to help answer the big questions addressed in the decadal survey. Recommendations include that the Artemis program develop science requirements to this end, and NASA has already published a list of objectives they plan to pursue in their return to the Moon.

10) The decadal survey’s full list of recommendations is ambitious, and comes with a high price tag, so an alternative program was suggested that would fit under current funding levels. We can count on the completion of the Mars Sample Return mission, and for a handful of lower-cost missions to be launched, but the rest of the wish list described above could be cut back. Should budgets not grow, big-ticket items the planetary science community is prepared to compromise on include: not starting work on Mars Life Explorer or the flagship Enceladus oribilander, delaying the selection of two New Frontiers missions and delaying the start of Uranus mission development until 2028. Getting a spacecraft to a distant target is always a waiting game, and in reality, we may have to wait just a little longer than we’d like to see some of these plans come together. But, hey, there’s always the next 10-year wish list!

Question Your World: Why Is Everyone Talking about Uranus?!

Question Your World: What Does It Take to Fly a Helicopter on Mars?