Question Your World: What Are Xenobots?

ScienceMuseumofVA · Question Your World - What are Xenobots?

Here’s how it all happened. Human scientists could do many iterations of various cellular constructions, but that could take years or longer. So, the researchers employed the powers of an algorithm to expedite the trial and error process to see what shapes would work best for specific functions, in this case self replication.

These scientists were working with embryonic stem cells from an African clawed frog, specifically early stage skin cells, and built them as the algorithm suggested. Also worth noting: this frog's scientific name is Xenopus laevis, hence the "xeno" bots!

So, what was the shape the algorithm suggested? Turns out to be kind of shaped like Pac-Man!

This Pac-Man-shaped xenobot construction is also capable of moving around in liquids thanks to cilia, naturally occurring hair-like extensions.

So, where does all the reproduction happen? These Pac-Man-shaped xenobots were put into a tray of early frog stem cells. Early stem cells don’t do anything on their own, but this motion-capable xenobot clumped the early stage stem cells together. This enhances the communication between those clumped together stem cells and they essentially join together to become its own cellular organism. 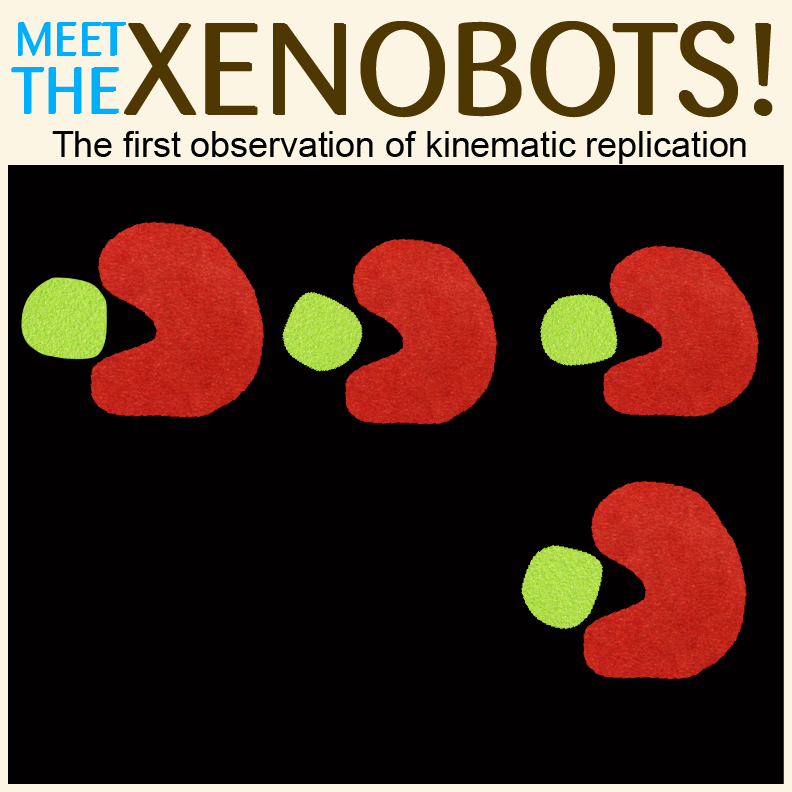 So, why on Earth would anyone do this? Have we learned nothing from Jurassic Park?!?

The ethics behind this technology are absolutely important and worthy of much conversation and thought, but the reason for this experiment is to ultimately see if we can raise our quality of life. Using biological components to essentially make living machines could be very helpful for exploring new breakthroughs in the medical industry and for environmental conservation.

To have something nontoxic—instead of traditional metals or plastics—could make these xenobots good candidates for being put to work within a living systems ranging from your body to larger scales, like bodies of water. Xenobots could have specified functions like cleaning up toxic chemicals or aiding with medical processes in our organs. The replication part is key here as well, to be able to reproduce itself as needed to achieve its designated task.

Much more research and many ethical conversations are left to be had before this becomes a reality, but for now these scientists were pretty astounded by this discovery. Plants do their budding thing. Animals do the birds and bees thing. And now xenobots have been observed doing their kinematic reproduction thing!

Question Your World: Can We Change Our Biological Clocks?

What is Artificial Intelligence?

Question Your World: How Can an Artificial Pancreas Help Manage Diabetes?