The Dazzling Science of Zebra Stripes

A group of zebras is called a dazzle, which seems appropriate considering how fabulous their black and white stripes look! Zebras are only found in Eastern and Southern Africa, but starting in the 1800s, scientists all around the world began trying to figure out why the animals have their signature look. So, why do zebras have stripes? Let’s open up that can of flies! 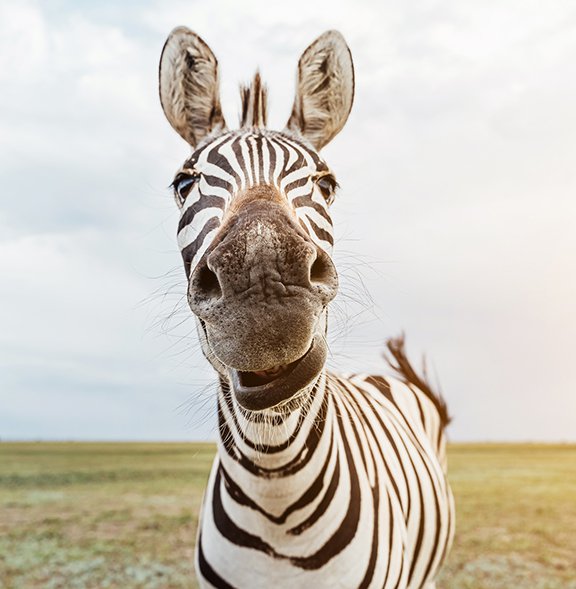 Many scientists have proposed ideas on why zebras have stripes. These educated guesses are tentative, a building block from which to base other research and allow for others to test. They are true until proven otherwise, a fundamental aspect of scientific exploration.

Our understanding of how the natural world works changes as we continue to ask questions, design good experiments and collect data. So just because there are flaws discovered with a hypothesis, it doesn’t mean the effort wasn’t hugely beneficial in advancing our scientific understanding.

Here are just a few of the explanations scientists have proposed about those dazzling zebra stripes over the years, and how they are holding up to research.

Hypothesis 1: Predator confusion
Spread your fingers out in front of your face and move your hand left and right quickly. Hard to focus, right? Now imagine you are a lion and your hand is fifty zebras running away from you. Can you see how that could be a bit bewildering? While confusing a predator is the most commonly repeated theory about why zebras have stripes, there’s a catch: lions do most of their hunting at night when the striping effect is less noticeable.

Hypothesis 2: Camouflage
What else looks like stripes in a savannah? Tree branches and tall grass look somewhat similar. Another long-believed hypothesis is that zebras can camouflage and hide from predators amongst the trees because of their stripes. Many animals use camouflage, however zebras travel in groups and defend themselves, two characteristics not associated with camouflaging animals.

Hypothesis 3: Warning
Do not mess with a zebra. They may dazzle you with their cute and cuddly looks but they kick, bite and kill. Similar to a skunk’s black and white coat, famous British naturalist Alfred Wallace proposed that the stripes say, “mess with me, and you’ll regret it.” When researchers simulated the eyesight of lions, they found they could only see stripes at close distances when the predators would already be committed to a hunt. Lions are also statistically more likely to seek out and hunt zebras than other prey, so nothing about stripes seems to deter lions from targeting them. 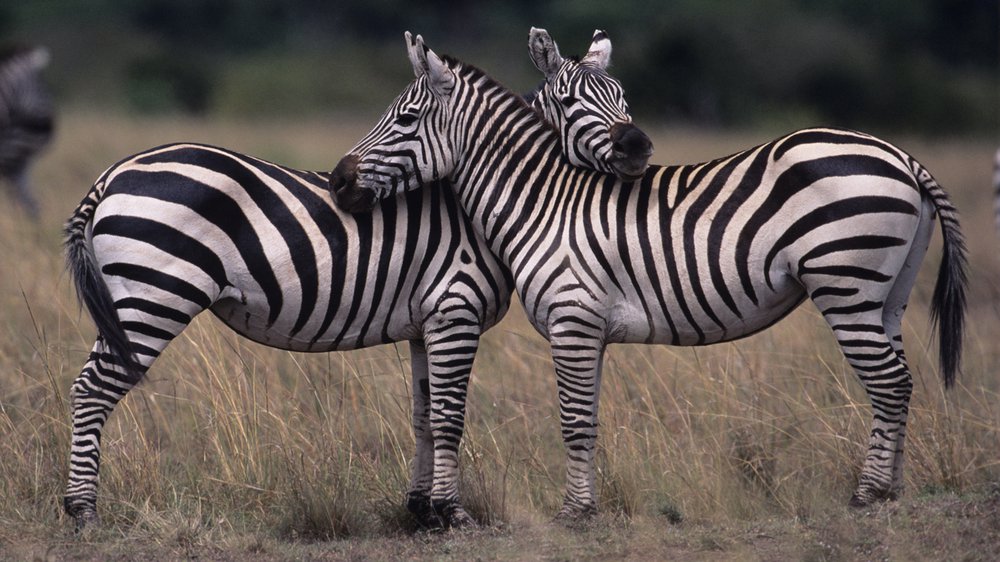 Hypothesis 4: Identification
Life is about more than just not getting eaten! Every zebra’s pattern is unique. Some researchers suggest perhaps zebras can identify each other by their stripes. Charles Darwin thought the stripes help zebras choose a mate for reproduction. However, other equids like horses can recognize individual horses without the stripes, so no evidence has suggested that individual recognition of zebras has to do with their unique striping.

Hypothesis 5: Temperature regulation
Black absorbs heat and white reflects it. Some scientists theorized zebra stripes heat and cool the air near the animal in a way that creates mini air currents. The invisible fans cool down the zebra, who researchers noted, seem un-bothered by the savannah sun. A Hungarian group of scientists looked at air flow made by white and black stripes of hair with special cameras. They concluded that the only way cooling air currents form is if the zebra is perfectly still in direct sunlight from above with no wind … not a common occurrence.

So what’s the latest hypothesis for why zebras have stripes? Before getting to that, let’s take a quick brain break for another zebra quandary: are zebras black with white stripes or white with black stripes? Let us introduce Tira, the polka-dotted zebra. A rare mutation to the pigment-producing cells that gives his hair color changed his fur from having stripes to dots. His coloring makes it easy to see zebras are black with white stripes! Now for the final hypothesis about why Tira’s family looks like candy canes.

Hypothesis 6: Bite prevention
Parasites are small in size, but a massive threat to zebras. Parasites can make zebras feverish, lose weight, cough and eventually die. Zebras get parasites from the biting flies and tabanids (horse flies and deer flies) that carry them. Equids have tails that can swat away these bugs, but how could zebra stripes stop flies from biting them? Turns out, the stripes seem to confuse flies' visual systems and make it difficult for them to land on the zebra.

Evolutionary ecologists noticed that zebras had thinner, packed stripes in the regions of Africa with more biting flies. The same group did a variety of experiments, including covering horses in a blanket with zebra stripes. The biting flies landed on the covered horses less than horses without the cover. Another study showed flies were deterred from landing on white and black striped trays and zebra-looking sculptures. This means current research data supports the hypothesis that zebra stripes evolved to provide some protection from biting flies.

So, case closed? Well, for now.

Generations of scientists have dedicated their careers to answering what might at first have seemed like a simple question—why do zebras have stripes—which has led to incredible and unexpected discoveries. It’s a great reminder to never stop being curious!

Come see a real zebra pelt in our touring exhibition Skin: Living Armor, Evolving Identity. The exhibition will be with us until January 2023.

Question Your World: How Well Do We Know Giraffes?