2020 has certainly been a tough year so far. Not only have we been dealing with a global pandemic, but now we’re hearing news about MURDER HORNETS! What is going on here? Murder hornets?!? Really?!?

It’s true, it’s true, it’s true. We’ve got quite the critter news story for you today, but relax folks, it’s not as scary as it seems. Vespa mandarina, or the Asian Giant Hornet, has officially been spotted in North America. This is an invasive insect, originating near the Asian subtropics and up into Japan. No one knows exactly how they got here, but it was most likely an accident, like being transported on a shipping container or something. It’s quite possible that some of these ended up in a ship’s ballast or perhaps wound up in some shipping containers that were being transported from Asia to North America.

It’s the world's largest hornet, clocking in at about two inches. Another frightening characteristic here is that the stinger is long enough to poke through a protective beekeeping suit. On top of all that, like all hornets,  it’s also venomous! In Japan, about 50 people die every year from this insect’s sting. Insect sting related mortalities are not a new thing though. Here in the United States the CDC reports that from 2000-2017, around 60 people died every year from bee, wasp, or hornet stings in the nation. Scientists are saying they don’t attack humans unless we are threatening them or their nests. Some space and a little respect towards their personal bubble goes a long way, apparently.

Okay, so they are not called Murder Hornets because of their desire to take on the human race, so what do they unleash their insect terror on? Some of their favored targets are bees and wasps. A worker Asian Giant Hornet will find a hive, mark its location using pheromones, and then return with a full squad of Hornets and go full Quentin Tarantino on the hive. It takes about 50 or so of them to totally destroy a bee colony within an hour. It's a vicious and brutal attack where a single hornet can kill one bee every 15 seconds by stinging or decapitation!

Not good news for our already endangered and stressed pollinator bee friends. Keep in mind that our planet’s ecosystem has evolved over millions of years to reach a natural state of balance. Every member of the ecosystem has a role in maintaining a somewhat ideal balance for life as we know it. Bees do their fair share of the work for the ecosystems, but also for our direct use. Bees are natural pollinators. In fact, they provide humanity with nearly $9 billion worth of ecosystem services. Native pollinators, like these bees, enable and support the production of at least 90 different commercial crops here in the United States. That’s a lot of work for an animal that does not get a pay raise or any insurance coverage.

Japanese bees, however, have evolved in the presence of these hornets and have found a way to deal with their local murder hornet situation. Over many generations, the Japanese bees have learned to adapt to this challenge by literally cooking the hornet alive! A swarm of Japanese bees can swarm around a murder hornet to raise the temperature enough to kill the hornet. Yes, this means many small bees combined to make a big ball of heat around the murder hornet. We’re not making this up!

So, what’s the plan? Scientists are trying to identify and destroy these hornets’ nests, preventing a long residency in North America. However, because of their underground nesting habits, tracking them down is a bit harder than spotting them on trees. Scientists have been using many different methods to try to track them down, including the use of thermal imaging cameras which detect the hornet colony’s cumulative heat as a sign of where their nest is. 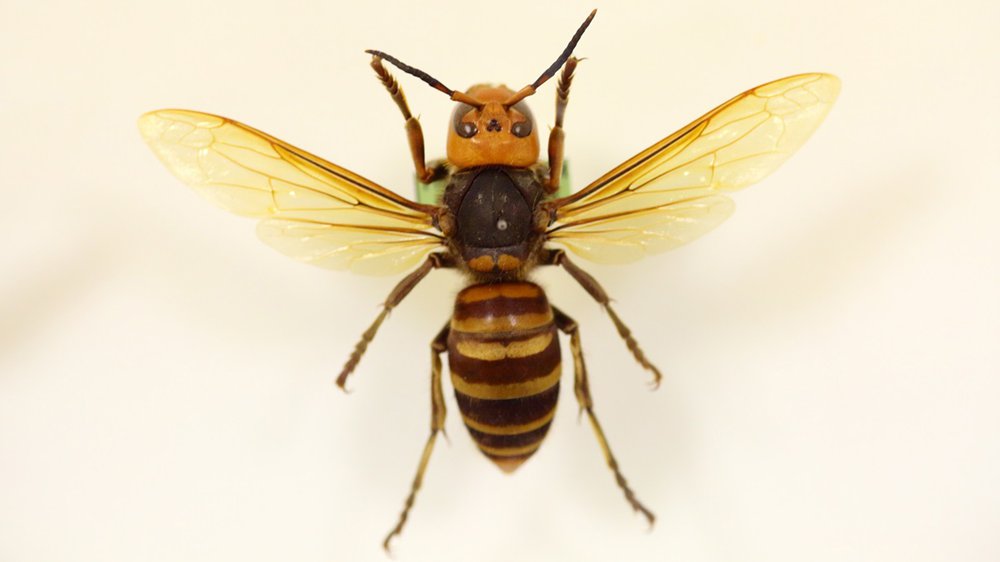 A quick related note: This heat sensitive camera is a similar technology to the ones used by urban planners and scientists to gauge temperature differences in our urban areas. We've done some work on that exact topic as well! Okay, back to the hornets!

If you stumble upon one - which is unlikely - it’s highly advisable to keep at least 10 feet away to avoid any potential stings. Citizens are encouraged to report sightings to wildlife specialists at your local state agency or university, not your local pest control services. These invasive hornets need to be properly tracked and studied, work commonly done by your region’s agricultural and wildlife divisions. While there are no known nests in the US currently, scientists are remaining vigilant trying to locate any potential nests in order to prevent a residency in the US.

What comes next? In terms of the animal’s life cycle, we’re in the queen-emerging phase right now. Around late April or early May is when the queen hornets will come out of their nests in search of food. Many are attracted to sap or fruits. This is another opportunity for scientists, hoping to catch as many queens as possible in hopes of lowering the number of future generations of murder hornets. The drones will be out a little later in the season. Entomologists say these hornets are most destructive in the summer.

So remember folks, while COVID-19-related social distancing is still suggested between humans, it may not be a bad idea to add the Murder Hornets to that list too!

Question Your World: Can Cockroaches Feed the World?